Jimmy Stewart – One of Many who fought for our Country 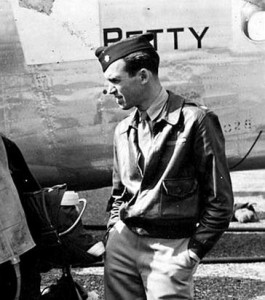 Jimmy Stewart joined the U.S. Army Air Corps in 1941. Like many of the celebrities below, he risked his life for the values his country stood for, flying around 20 missions into Germany.

Read over the list below and then imagine how improbable it would be for the current crop of Hollywood elite to be seen anywhere near a battlefield:

Sterling Hayden , US Marines and OSS . Smuggled guns into Yugoslavia and parachuted into Croatia .

James Stewart , US Army Air Corps. Bomber pilot who rose to the rank of General.

Walter Matthau, US Army Air Corps., B-24 Radioman/Gunner and cryptographer.

Steve Forrest , US Army. Wounded, Battle of the Bulge.

Kirk Douglas , US Navy. Sub-chaser in the Pacific. Wounded in action and medically discharged.

John Carroll , US Army Air Corps. Pilot in North Africa . Broke his back in a crash.

Lee Marvin US Marines. Sniper. Wounded in action on Saipan . Buried in Arlington National Cemetery , Sec. 7A next to Greg Boyington and Joe Louis.

Art Carney , US Army. Wounded on Normandy beach, D-Day. Limped for the rest of his life.

Rod Steiger , US Navy. Was aboard one of the ships that launched the Doolittle Raid.

Tony Curtis , US Navy. Sub tender USS Proteus. In Tokyo Bay for the surrender of Japan .

Forrest Tucker, US Army. Enlisted as a private, rose to Lieutenant.

Denver Pyle , US Navy. Wounded in the Battle of Guadalcanal . Medically discharged.

Neville Brand, US Army, Europe .. Was awarded the Silver Star and Purple Heart.

Tyrone Power, US Marines. Transport pilot in the Pacific Theater.

Charlton Heston, US Army Air Corps. Radio operator and aerial gunner on a B-25, Aleutians .
Danny Aiello , US Army. Lied about his age to enlist at 16. Served three years.

James Arness , US Army. As an infantryman, he was severely wounded at Anzio , Italy ..

Rod Serling. US Army. 11th Airborne Division in the Pacific. He jumped at Tagaytay in the Philippines and was later wounded in Manila .

Gene Autry , US Army Air Corps. Crewman on transports that ferried supplies over “The Hump” in the China-Burma-India Theater.

Russell Johnson , US Army Air Corps. B-24 crewman who was awarded Purple Heart when his aircraft was shot down by the Japanese in the Philippines .

Jackie Coogan , US Army Air Corps. Volunteered for gliders and flew troops and materials into Burma behind enemy lines.

Claude Akins , US Army. Signal Corps. , Burma and the Philippines .

Mel Brooks , US Army. Combat Engineer. Saw action in the Battle of the Bulge.

Earl Holliman. US Navy. Lied about his age to enlist. Discharged after a year when they Navy found out.

Harry Dean Stanton, US Navy. Served aboard an LST in the Battle of Okinawa .

Soupy Sales, US Navy. Served on USS Randall in the South Pacific.

Lee Van Cleef , US Navy. Served aboard a sub chaser then a mine sweeper.

Don Adams. US Marines. Wounded on Guadalcanal , then served as a Drill Instructor.

James Gregory, US Navy and US Marines.

Fess Parker, US Navy and US Marines. Booted from pilot training for being too tall, joined Marines as a radio operator.

Raymond Burr , US Navy. Shot in the stomach on Okinawa and medically discharged.

Eddie Albert , US Coast Guard. Bronze Star with Combat V for saving several Marines under heavy fire as pilot of a landing craft during the invasion of Tarawa ..

Cark Gable , US Army Air Corps. B-17 gunner over Europe .

Jack Palance, US Army Air Corps. Severely injured bailing out of a burning B-24 bomber.

Cesar Romero, US Coast Guard. Coast Guard. Participated in the invasions of Tinian and Saipan on the assault transport USS Cavalier.

Jason Robards , US Navy. was aboard heavy cruiser USS Northampton when it was sunk off Guadalcanal . Also served on the USS Nashville during the invasion of the Philippines , surviving a kamikaze hit that caused 223 casualties.

Randolph Scott. Tried to enlist in the Marines but was rejected due to injuries sustained in US Army, World War 1.

Ronald Reagan. US Army. Was a 2nd Lt. in the Cavalry Reserves before the war. His poor eyesight kept him from being sent overseas with his unit when war came so he transferred to the Army Air Corps Public Relations Unit where he served for the duration.

And of course we have Audie Murphy , America ‘s most-decorated soldier, who became a Hollywood star as a result of his US Army service that included his being awarded the Medal of Honor.