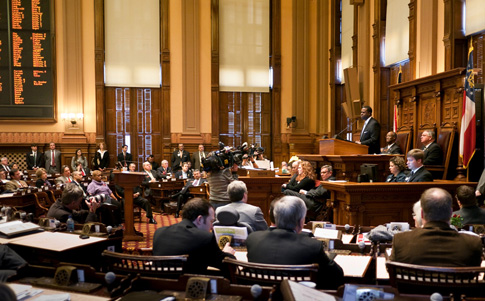 Here are some suggestions as to what we can do in the remaining days of the Georgia General Assembly.

First, you can look up any bill or resolution directly on the State website. This excellent search tool lets you look up bills by number, topic, and even representative:

Special Interest groups follow legislation. You can find one that is of particular interest to you and look at the bills they are following. Here are a few of them that track Georgia legislation:

Find your State Representative and State Senator here and put their contact info in your phone. https://openstates.org/find_your_legislator/

Here are some of the bills that we are following in the 2021-2022 session. Click on the link in the bill number to be taken to the Georgia Legislature page for that bill where you can track progress, read the bill, find sponsors, etc. Realize that even if a bill doesn’t pass in 2021 it will remain alive and could be brought up again next session.

Crossover day this year is Monday, March 8th. Any bill that doesn’t pass the chamber where it was introduced (House for House Bills (HB), Senate for Senate Bills (SB)) is ‘dead’ for this session. We will try and update this after Crossover day.

Some of the bills we support that passed both chambers

HB 511 – Make legislature use funds for collected purposes
In 2020 Georgia approved Constitutional Amendment to allow the legislature to direct collected fees. This bill forces funds collected from fees and taxes on specific activities to be used for the purpose collected.
Passed House 168 – 0
Passed the Senate 51 – 0

SB 100 – Observe standard time year-round
As modified, this bill would keep Georgia on Daylight Saving Time year-round, however, it will become effective “only if the United States Congress amends 15 U.S.C. Section 260a to authorize states to observe daylight savings time year round.”
Passed Senate 46 – 7
Passed House 111 – 48

SB 202 – Absentee Ballot Bill
Passed to House Rules on 3/22, heading to floor. Does not address Election Fraud, but it appears to tighten up absentee voting with some or all of the following provisions (waiting on final language analysis – its a 98-page bill):

HB 531 – Elections Reform Bill
This 66-page bill (!) passed the Georgia House 97 – 72. Receiving the strongest Democrat condemnation of any bill. It is NOT a “voter suppression” bill. The bill does some good stuff, but the State is addressing voter fraud when what happened in November was election fraud. And this bill does nothing to address the real reason the election in Georgia was stolen.
Passed House 97 – 72

SB 241 – Elections and Voting; revise comprehensively
Among other excellent provisions, this bill would require that voters have a legitimate excuse to vote absentee, require a driver’s license number or state ID number to apply for an absentee ballot on paper, and require absentee voters to get their ballot envelope signed by a witness and enclose a copy of their photo ID with the ballot. It would also empower the state to prohibit the Secretary of State, and any of their attorneys or staff to enter into any consent agreement that limits, alters, or interprets any provision of this chapter without obtaining the approval of the General Assembly and limit the use of mobile voting facilities to emergencies. This might help avoid some of the problems we had with election fraud in 2020. This bill has 31 sponsors, so it should pass the Senate on Crossover Day. Unfortunately, the bill currently has no transparency provisions needed to prevent the election fraud that occurred in the November 2020 general election. It also allows removal of elected local election officials from their posts, replacing them with appointed ones – probably not a good idea, We will put up more about this bill after it heads to the House.
Passed Senate 29 – 20

HB 60 – Georgia Educational Scholarship Act
Allows eligible families to access a portion of the education dollars that the state has allocated for their child and spend it on qualified educational expenses. Strongly opposed by liberal groups. Similar to a school voucher.

HB 228 – Changes illegal alien driver’s license
Illegal Alien driver’s licenses and identification cards shall not be proper identification for presentation to a poll worker. This bill would require the term “BEARER NOT A U.S. CITIZEN — NOT VOTER ID” on illegal alien licenses. Probably not going to pass because of stupid/corrupt/cowardly legislators.

HB 276 – Prohibit males from competing with females
Makes it unlawful for a public school or University to operate athletic programs or activities that permit a person whose gender is male to participate in an athletic program or activity that is designated for females. Permits lawsuits against schools that defy splitting up different-gendered student athletes.

HB 358 – Provide when a declaration of a state of emergency or disaster by the Governor shall expire
Forces the expiration of State of Emergency after 30 days and requires that the Legislature reconvene to continue it (currently the Governor can do it on his own). Unfortunately, this bill doesn’t look likely to pass because it limits the power of the Governor.

SB 245 – Right to keep and bear arms (no matter what the feds say)
This bill would prohibit public officers from ordering the enforcement of certain federal acts regarding the right to keep and bear arms. According to the text of the bill – “no federal executive order, agency order, law, statute, rule, or regulation … shall be knowingly or willfully ordered to be enforced by any public if contrary to Article I, Section I, Paragraph VIII of the Constitution of this state”

SB 266 – Save Girls Sports Act
This bill has very broad Republican support. It makes it unlawful for a public or private school whose students compete against a public school to “operate, sponsor, or facilitate athletic programs or activities that permit a person whose gender is male to participate in an athletic program or activity that is designated for females”

Some bills we DO NOT support

If you enjoy fighting against something instead of for it, here are just a few introduced by misguided legislators. None of these will pass as long as Republicans maintain control, but we can’t let our guard down! These issues will continue to be advanced, and if, God forbid, Democrats regain control they will become law. NOTE: We could have included many more, but our patience reading this dribble is limited.

HB 355 – Establish a carbon registry
Enable the creation and tracking of carbon credits that can be accrued and then sold by developers to companies looking to offset their carbon footprint.

SB 46 – Allow release of medical records (without consent)
State-wide vaccination registry for children under age 18. Vaccination information can be kept and released with consent of child or parent.