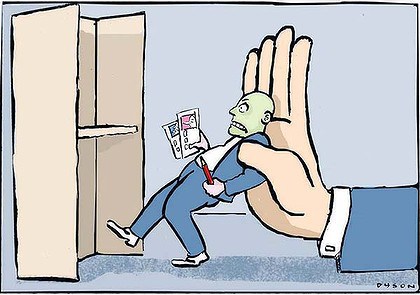 While speaking in Cleveland about the importance of middle class economics the President said that “It would be transformative if everybody voted — that would counteract money more than anything.”  In fact, exactly the opposite is true.  If you want to reduce the amount of money involved in politics, make it harder to vote.

I ran for State Representative in 2014.  I was holding a campaign sign outside a precinct on Election Day when a campaign worker and I started talking.  After a few minutes he said he really liked my views, and was sorry that he had voted for my opponent.  I asked if he would mind telling me why, to which he replied, “I saw his name more than yours.”  He then asked me if there was a way he could change his vote.

The access to information today makes it possible for anyone to find out anything about any candidate in any race.  Is there a runoff in Chicago?  Give me two minutes and I can find the names of all the candidates, tell you the issues in the race (along with their stances on each issue), and even tell you who is supporting their campaign.  Anyone who is really interested in an election now has the tools to find a candidate’s voting record, ethics complaints, and how they are rated by organizations such as the NRA, the ACLU, Freedom Works or pro-life groups.

Money is only used to sway people who feel they should vote but don’t care enough to research the candidates and the issues.  Make voting mandatory and the number of people pulling the lever in ignorance of a candidate’s qualifications only increases.  Informed voters do not make up their mind on TV commercials or campaign mailers.  If anything, they treat these promotional pieces with a high degree of skepticism.

To reduce money in elections, make it harder to vote.  Make voters answer a few basic multiple choice questions – How many branches of government are there?  What is the Bill of Rights?  How many Senators does Wyoming have?  Or better yet, when voters come into the polls give them a blank piece of paper and a pencil and tell them to write down the names of the people that they want to vote for from memory.

Last year, winning Senate candidates spent an average of $10.3 million on their campaigns.  I contend that a successful campaign could be run on 1/100 of that money and interested voters would have no problem making up their minds.

If two Congressional candidates agreed ahead of time to each limit spending to $10,000, what do you think would happen?  Would there still be voter turnout?  Of course there would.  And maybe then you would not have voters making up their mind based on whose name they saw the most.