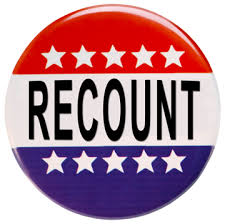 No fluff – here are just the facts about the attempted recount by Green Party candidate Jill Stein:

One thought on “2016 Election Recount Facts”