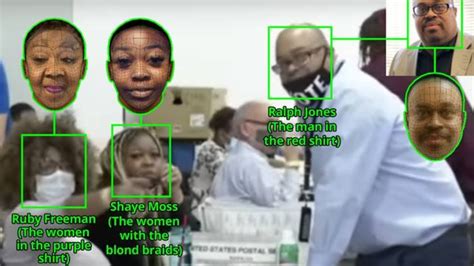 UPDATE – Depositions originally scheduled to begin on June 10th were pushed back to the end of July, then August, then who knows. There are several cases that could use these depositions, but the plaintiffs are waiting to see what they find during discovery before putting together the questions they want to ask these employees, and the underlying cases are being dragged out by Fulton County, who is using every delay tactic they can.

Ruby Freeman and her daughter (Shaye Moss – State Farm Arena suitcase blonde-braid woman in GA who told observers to leave and that the counting had ended for the night – and then started counting after everyone had left) have now both been served and ordered to appear at depositions to provide information about the Nov 3 election. They have been ordered to bring all electronic communication related to the 2020 general election (including emails and records of social media postings) and any electronic devices they used during the entire year of 2020. Shaye’s deposition will be on June 10th, Ruby will be deposed on June 11th.

Ruby refused to open the door for the process server, saying the subpoena should be given to her lawyer and he wasn’t available. The process server left it slightly under the doormat and took a photo.

Also served was someone named Michael (or David) Makever Alligood (to be deposed on June 18th). In addition to the records and items that Ruby and Shaye are asked to bring, he is to bring any communication between him and the Georgia SOS office, The Center for Election Innovation & Research, ERIC, and others, including any communication he had with elected officials and nonpartisan officials connected with absentee ballots. He is also asked to bring payroll documents between him and the Georgia Secretary of State.

It is our understanding that Ralph Jones, the Fulton County Registration Chief, has already been deposed, but that some questions we needed answered were not asked.

This is a civil suit that was originally joined with the suit brought to inspect the absentee ballots. Realize that these depositions will be used as evidence for a trial, and that the information obtained later this week will not be made public for some time. Unless they are somehow allowed to avoid answering questions, this could be a bombshell.

Click HERE for a refresher of what happened at State Farm Areana on November 3, and why these depositions could be so important.

One thought on “Ruby Freeman & Shaye Moss to be Deposed”