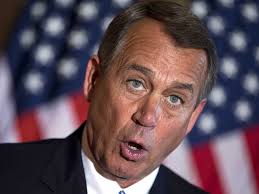 We called all the Georgia Republican Delegation and asked them why they voted for Boehner.  We didn’t get into an argument, we just wanted to know what their staff would say.  I am sure these are NOT official positions, but this is what we were told on the phone.

A theme we heard several times was that the Georgia delegation wanted to present a united front.  Well,t they did – but it was not the front that many in the Tea Party had hoped for.  We were very disappointed that some of our Representatives’ first vote in the new Congress (or ever) was for John Boehner, and found it more than a little symbolic (ironic?) that Boehner’s first act was to plant a kiss on Nancy Pelosi.

Representative Lynn Westmoreland (R – 03) 202-225-5901
1/6/15 5:20 pm  – Considered the vote carefully in the days before the vote, but finally decided Boehner was the best choice to lead the Republicans in the new Congress.  Since no serious candidate came forward in the last 48 hours decided to stick with Boehner because he was the best choice to get moving with the Republican agenda.
Representative Tom Price (R – 06) 202-225-4501
1/6/15 5:24 pm –   The aid I spoke with hadn’t had the chance to speak with him – Price has been on the floor and in meetings since his vote so the staffer didn’t know the reason for Tom’s vote, and the Congressman has no official position at this time.
Representative Rob Woodall (R – 07) 202-225-4272
1/6/15 5:08 pm – Congressman Woodall voted for Boehner along with rest of GA delegation to have a united vote and continue the current leadership  instead of dividing the vote which could have given the Speakership to Nancy Peolsi.  I told her that there was no way Pelosi could have won, and she told me that if a few more Republicans had not voted for Boehner it would have given the Speakership to Pelosi. [This is certainly not true – see Louie Gohmert’s response to this argument on his website]
Representative Austin Scott (R – 08) 202-225-6531
1/6/15 5:50 pm – Got answering machine saying staff was busy or it was outside of business hours
Representative Doug Collins (R – 09) 202-225-9893
1/6/15 – 5:51 pm – He voted with the rest of the GA delegation because nobody said they were going to be running against Boehner until the last minute.  But the staffer didn’t want to misquote the Congressman so he said he would send me an official statement when it was ready.
Representative Jody Hice (R – 10) 202-225-4101
1/6/15 – 5:04 pm  – It was a difficult decision for Jody, and up until 10 minutes before the vote he was still looking for another candidate, but could not find a strong contender.  Jody was not sold on Boehner but was given assurance by the Speaker that he would pursue a conservative agenda.  He is not committed to Boehner, and if he doesn’t do as promised he will support someone else as Speaker. [ When will he support someone else?  He is planning on winning another term already?  John Boehner has already had two terms to make a difference.  We are tired of “next time.”  We want “this time.”]
Representative Rick W. Allen (R – 12) 202-225-2823
1/6/15 – 5:43pm – During committee discussions no other candidate came forward, and  nobody had voted against Boehner  in conference.  No other candidate presented until the last minute, and rather than go with the ‘coup’ [the staffer’s word] and try to break apart the Republican party, which is what the Democrats wanted, he decided to present a unified front and vote for Boehner.
Representative Tom Graves (R – 14) 202-225-5211
1/6/15 – 5:57 – Boehner was the Republican candidate they picked back in November, and Graves decided to vote for him because he was the Republican candidate.  I said that there were other candidates, but she said that Boehner was the best one.

1/7/15 – 9:10 am – Back in November Louderdmilk was one of 3 people who said ‘no’ to boehner, but no other candidate came up that was viable at that time.  The other three Republican candidates came in at the last minute and Loudermilk did not feel that they had adequate training or were ready, so he made a decision on the House floor to support Boehner after much prayer and thought.